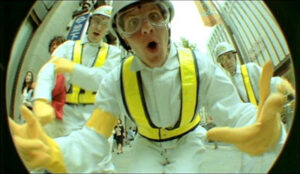 In addition to their iconic sound, you always know you’re watching a Beastie Boys music video because of their extensive use of fisheye lenses and funky, bright costumes. From the early Hold It Now, Hit It (License to Ill, 1986), to Intergalactic (Hello Nasty, 1998) to Ch-Check It Out (To the 5 Boroughs, 2004), there is always a sense of familiarity. They have specifically primed their environment with common elements, particular to their style and execution. As performers, they have also crafted a who-watching-who’s scenario: are we, the listeners, the proverbial fish in the bowl, or are they? Much like their backwards lyrics (“I like my sugar with coffee and cream,” and “open up your ears and clean out your eyes”), they are creating an Alice in Wonderland environment in which the world might be topsy-turvy or right-side up, depending on your point of view.

Priming your environment is essential as an artist – what is at the personal foundation of what you want to create? Perhaps you want to express something deep and true about yourself, or perhaps instead you’d like to make some comment about society, culture, or other part of the external world. More likely, in the case of performing music, we often want to express something about the music itself as it relates to our own emotions. In any case, if your message is consistent, it will be satisfying to create and uplifting to witness, as is my experience with the music of the Beastie Boys.

Our musical language and expression encompasses our entire history as a creative artist – where we come from, any particularly influential teachers or places of study, and specific repertoire, techniques, or traditions that we hold in high esteem. I called this the living ecology of the performer, a set of personal details that is always evolving but is unique to each individual artist. What is your living ecology, and how does it play out in your daily expression of your art?

Time, part 2: Internal and External Experiences as Related to the Telescoping Effect of Time
August 20, 2020 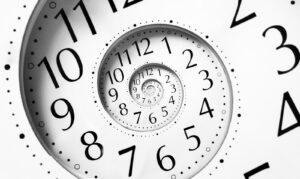 For part 1 of this blog post, scroll down the page to the next posting.

Last time, I left you with some words of wisdom from pianist Jane Bastien: “practice fast, learn slow. Practice slow, learn fast.” This is not just a simple adage, but an invitation to explore our sense of time (and timing) as we practice and perform music. We will return to this idea shortly.

In recent email exchanges with my friend quoted above, the brilliant writer Roy Doughty, we discussed the structures by which we create our own perceptions of time and others over which we have no control. Namely, factors such as unconscious constructs and external influences give us little agency to completely understand the passing of time objectively. One fun example is attending a film at a theater (in pre-COVID-19 times, of course) – when the film starts, we are engulfed in surrounding darkness and have no reference points to understand how time and the environment outside is changing. Another example is when we listen to a piece of minimalist music – the passing of time can either be counted precisely or, we can let the repetitions of the music wash over us, enticing us into a meditative state. In such a brainspace, 10 or 20 iterations of a theme might feel like they take around the same time to pass as repetitions that are two or three times longer (or more!); our perception of time, in a sense, becomes flattened. This shows that our understanding of time’s passage is influenced by, among other things, awareness (or lack thereof), the measuring of time (like a metronome or internal beat), and external reference points (e.g. a window to see the changing of light and shadows or a bell to signal the starting and ending of a class).

Philosopher Peter Singer spoke about “literary time” at a lecture I attended in college. This is the magical effect of time dilation that happens when you read a book, watch a movie, or experience any other time-based arts, especially one with a narrative (a dance routine, a play, etc.). A film, for example, that is around 2 hours in length might cover events that take place over years or even decades. We suspend our perceptions of our own reality at the service of fully absorbing a story whose passage of time is perhaps vastly different than our own, and more importantly, it doesn’t seem strange at all!

Because we are highly suggestible when it comes to perceiving time, it is imperative that as musicians, we must always practice at a variety of speeds. Additionally, slow and mindful consistent practice will always serve as a magnifying glass for time and attention, and this is the point that Jane Bastien was making. Not only do we understand time better when moving at a slower speed through this shift in awareness, we decrease the amount of time by which it takes to learn. In a broader sense, we change our whole future timeline – by slowing down we speed up the potential to learn. Because of this, I would like to take Jane Bastien’s motto one step further: practice slow, learn fast, and in doing so, perceive time on various levels and at various speeds. Let me know your thoughts in the comments below!

Time, part 1: Fleeting visions of Spot the cat and our perception of time
August 7, 2020 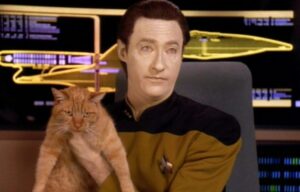 There was an excellent interactive article online at Reuters recently called Why time feels so weird in 2020. In it, author Feilding Cage demonstrates why familiarity and routine distort our perception of the passing of time; when we experience the same series of daily events for extended amounts of time, our attention becomes complacent, and time “seems” to pass by more quickly or slowly than in actuality. It was fun to do the time tests in the article, and I encourage you to do them as well. However (spoiler alert!), I was able to game the tests somewhat by setting up an internal metronome before exercises began. By counting off at a steady beat in my head, my expected psychological time distortion was superseded by my focus on maintaining a consistent counting speed.

In a related example, the episode “Timescape” from Star Trek: The Next Generation (season 6, episode 25) reveals how humans feel the flow of time as a nebulous event, distinct from the way time is measured by a mechanized device. The entire episode is fantastic, addressing the concept of time moving in different directions as well as highlighting characters’ emotional investments in beings that are mentioned but never shown (such as Data’s cat Spot and Wesley Crusher’s father), but that is a post for another time. Towards the end of the episode, the android Data performs an experiment, trying to understand the perception of time as it relates to the maxim “a watched pot never boils.” In Data’s experiment, he boils his tea pot sixty-two times, sometimes observing the pot and sometimes directing his attention elsewhere. He seems somewhat disappointed when he discusses the results with Commander Riker (a human), saying that “I have often heard people comment that time seems to pass more slowly in one instance, or more quickly in another. In reality, the actual passage of time remains fixed.” Riker counters that it is actually “how people perceive time. Every situation is different.” Data seems to accept that reasoning, especially when Riker suggests that he should turn off his internal time-monitoring system.

Time itself is a rather slippery subject. As demonstrated by the 2 examples above, we do not experience the passing of time in discrete “packets.” Indeed, as Commander Riker observed, “people do not have internal chronometers.” Our understanding of time’s flow, volume, and quantity is contingent upon our emotional state, attention to detail, and understanding of what has happened before and will happen after the present moment. Nonetheless, there are certain units of time that we become accustomed to over the course of our life: the length of a typical TV show (especially in the pre-streaming era, when there were regular, 15-30 second commercial breaks), the length of a typical symphony or sonata (if we are a classical music concertgoer), and, more universally, the amount of time it takes to do certain quotidian tasks, like brushing your teeth or getting ready for work in the morning.

As such, time is an essential component in analyzing, practicing and understanding music. It can be discretely measured with a metronome when practicing and felt or intuited when analyzing rhythm and structure. Alternatively, who among us hasn’t experienced the psychological distortion of time when performing or listening to an intensely moving piece of music? I remember hearing Morton Feldman’s Patterns in a Chromatic Field (an 85-90 minute piece) in college and feeling like no time had passed and simultaneously like an entire day had come and gone. It was quite emotionally exhilarating to hold 2 very different concepts in my mind at the same time.

Admittedly, this introduction has only begun to scratch the surface of how we perceive time. As such, I will be adding to these blog postings 2-3 times a month, specifically addressing how large concepts, such as time, focus, and conscious thought, influence our creation and understanding of music. I will leave you now with an aphorism by Jane Bastien, a wonderful pianist and creator of a student music book series, who used to tell her students “practice fast, learn slow. Practice slow, learn fast.” It is an extremely simple idea, but this kernel of knowledge will provide a valuable jumping-off point for much more extensive musical exploration. Until soon!